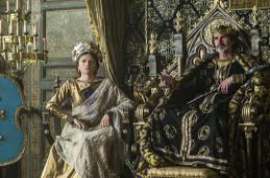 History Channel drama script chronicling the adventures of a Viking warrior (and supposedly a descendant of Odin), Ragnar Lothbrok. Curious as to what it was in the West, Ragnar is developing a plan to rebel against the long tradition of raiding East. Originally intended as a mini-series, the Vikings increasedin the second and third season.